My first born Addai was born on August 3rd 2010. I was in labor 32 hours. Postpartum I reflected on his labor and birth and learned that I should have done several things differently. I woke up in the morning with slight cramps and realized I had passed my mucus plug when I used the bathroom. We figured that if I was active it would help me dilate faster (Mistake #1).

By the time we were situated in our hospital room it was 1 am in the morning and I was EXHAUSTED. I told my DH to try to sleep and rest that I would wake him up if I really needed him. Thank God he got to sleep some because Lord knew he was going to need it. I tried to go to sleep in between contractions that were about 5 minutes apart by then. I remember waking up in between contractions and staring at a big hand clock that was hanging right in front of me the WHOLE night (Mistake #4).

By morning my contractions were steady at about 3-5 min. They were progressively getting painful but still bearable. We started walking around the hospital, using the birth ball etc…I was extremely tired because I had not slept in over 24 hours and the hospital did not allow me to eat. I felt so weak that Victor had to sneak in some crackers and cheese for me to eat without the nurses looking, hehehe. The food really helped get some energy back up in me. Between morning and 3pm nurses kept checking my dilation (Mistake #5). Although the contractions were painful I was managing them ok and was in control. By 3pm I was 8 CM dilated but fatigued and tired so our midwife at the time suggested that we break my water so that I could progress faster (Mistake #6).

As soon as my water was broken my contractions kicked into high gear, they were back to back and extremely painful. I didn’t want to move, my body became tense, I couldn’t manage the contractions; I felt like I was drowning in the contractions. Because I could not relax I stopped dilating. DH suggested I get in the hot shower to help me relax and I reluctantly said yes. DH had to almost carry me there because the pain from the contractions would not let me stand up. When I got in the shower I got immediate relief but the contractions were still unbearable DH had to hold me up in the shower.   After feeling like I had been an eternity in the shower enduring contractions (I was in there as DH recalls back to me less than 5 min). DH took me back to the bed but the contractions continued to drown me and felt unbearable I started asking for medication so the pain would go away (Mistake #7). DH encouraged me to continue without meds and so did the midwife but I kept insisting for relief via medication and kept saying to them that I was to tired to continue.

The midwife and my DH agreed to give me Stadol. After the Stadol was administered to me I got some relief because the medication seemed to have slowed down the contractions. About 20 min later (as my DH recalls back to me) I began pushing and about 30 min later Addai was born. We had told our midwife that DH wanted to catch the baby and cut his cord and he was able to do both things. I thank the Lord that although we made many mistakes due to ignorance my DH was an amazing birth coach and was always ready to help me, and encourage me through out the whole labor. 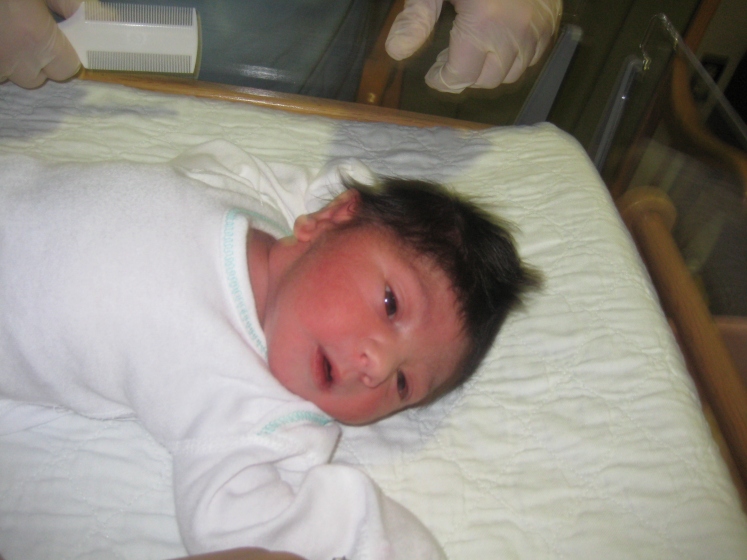 1. We learned that when I go into labor its best that I just go to sleep. I mean really just lay down and sleep and rest as much as possible because there is no way of knowing for certain how long I will be in labor and I will need all the strength I can get.

3. We should have left the hospital when the contractions spaced out.

4. When in labor DONT stare at the time or at clocks. That is so discouraging to keep reminding yourself how long you have been in labor. We should have taken that clock down! lol.

5. We learned that for goodness sake I have to EAT. Laboring is like running a marathon how in the world can you make it without energizing your self?

6. We learned that I do not need to be checked for dilation every hour. It interrupts the labor and it discourages you everytime you hear a nurse talk about how much you have not progressed boooooo!

7. We should have never broken the water bag. My body was not ready for what happen and I tensed up and was not able to relax because the contractions were just to fast and strong all of a sudden. It caused me to have to take drugs

We definitely took what we learned in this birth to our next baby’s Jezrahiah’s birth.