My first birth began with my water breaking and ended 36 hours later with a c-section. I knew from the moment we decided a c-section was best that I wanted to go for a VBAC for my next birth. Three and a half years later I got that opportunity.

After a lot of research, my husband and I decided to hire a midwife and give birth at a birthing center. It was one of the best decisions we made. We talked about different things that contributed to my c-section (my water broke first and my daughter was posterior and there was no progress after 2 hours of pushing) and things I could do to hopefully avoid those same problems (I took vitamin C to support a strong amniotic sac and did many exercises to encourage optimal fetal positioning).

My second pregnancy was so different from my first. One major difference was that I felt tightenings (or Braxton Hicks) from around week 30, I hadn’t felt any with my first. So when labor came around, I wasn’t quite sure if it was the real deal. I wavered back and forth and ended up sending my husband off to a series of business appointments with the promise he’d come when I called.

Sometime around 4:30 I decided to start making tacos for dinner and call my midwife to see what she thought. My contractions were close together, but they didn’t seem very long or intense. So I got the meat browning, put a movie on for my daughter and I called my midwife. She thought I might not be timing my contraction correctly and suggested feeling my belly tighten rather than timing them according to my sensation. And she was right! They were about 40 seconds long.

So after that I called my husband and my mom to come home and began running around trying to get things together. Tacos sounded soooo good, so I also tried to finished making the meat and preparing the toppings. Of course, the contractions were growing and I started to need to sway to handle a contraction well. A few times I even got down on my hands and rocked through contractions. I must have looked like a crazy person running back and forth insistent on making tacos.

Unfortunately by the time the tacos were ready I was too far along in labor to want to eat. We packed up quickly when Josh arrived and left without either of us enjoying the tacos. The drive out to the birthing center wasn’t as bad as I thought it was going to be. I pressed a Click It against my lower back during contractions. It would have been a miserable ride without it.

When we arrive at the birthing center, my midwife check to see how far along I was. I was at a 7 and he was nearly in the best position! That gave me a surge of excitement, but despite my research and the fact that I was doula I had no idea what to do next. So I asked my midwife what she would suggest. She suggested that I do a Miles Circuit, and so I did.

Contractions became more and more intense. I needed Josh to give me counter-pressure on my back during each contraction to make it through. Halfway through the second position, my water broke. The next contraction was HARD and it was only one or two more contractions before I desperately wanted to get into the tub.

My midwife had turned on the tub because I wanted to labor and birth in the water. But it wasn’t all the way filled and she protested that the water wasn’t the right temperature yet. But the only thing I could think about was my need to have warm water all around me. So I got in anyway.

Everyone was expecting Pax to come out momentarily, but he didn’t. There was lots of pushing to come. I don’t remember when our midwife’s assistant and doula showed up, but it was sometime in there. Thankfully everyone there was careful not to mention the time to me. I think I would have been very discouraged if I had known how long it had been.

We tried several different positions in the water and my midwife checked me to make sure I was completely dilating and there was no swelling. I was in the tub for more than two hours but I’m not sure how long. My midwife finally suggested that we (my husband had gotten in to support me) get out of the tub and try a new position because I wasn’t making any progress.

I tried the birthing stool for one contraction, but it was just painful and I kinda just wanted to go to the bed. I was shaky and didn’t feel like I could hold myself up and push at the same time. So I got onto the bed and laid on my side. Someone suggest that I put my leg up on a peanut ball. Pax finally began making progress. I felt secure on the bed. I didn’t have to exert any effort holding myself up and could focus on pushing and relaxing in between.

After a while, quite a while, the midwife had my husband hold my leg up while I pushed. We did that for a long time too. My good friend and doula also helped him a couple of times. Progress was being made, but I was discouraged and it hurt. It was during the final 30 minutes or so that I thought things like “a c-section would be so much easier”. I wanted to cry after each contraction, especially when I began to feel the ring of fire. I distinctly remember my midwife’s assistant telling me it was okay to let go of the contraction that another one would come. I desperately needed that verbal encouragement of what I needed to do after each contraction at the end.

Then finally- somehow- after nearly 4 hours of pushing, Micaiah Pax was born at 12:58 am.

I was exhausted, but I did it- and it was so much easier than my c-section. 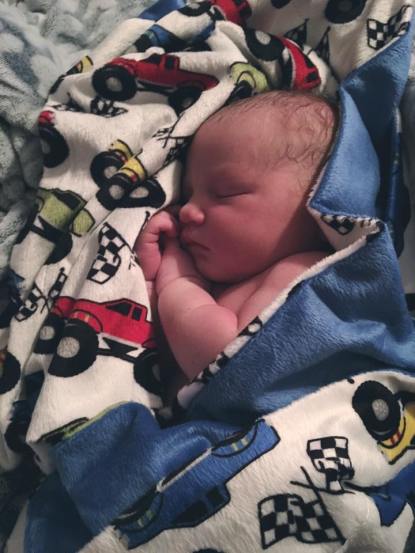