When my husband and I found out that we were pregnant with our first child, we really didn’t do our research. After all, the doctors and OBGYNs know what they are doing and they know what’s best right? We had a birthing class, which was more for those having a natural childbirth, not for those with a medicated hospital birth (even though the majority of the class was planning on medicated births). So, we thought we knew what to expect, but we really didn’t.

My pregnancy went very smoothly. I loved being pregnant and watching the baby grow inside of me. I hated visiting my OBGYN and felt that she was often condescending. I heard things like “Are you SURE you are drinking enough water?” and “Do you have a date in mind?” Really? I want the baby to come when he is ready! I never heard any of these phrases from my midwife with our second, which I’ll talk about in part two. This particular doctor had an awesome PA, but I feel like her colleges just wanted to get me in and out. At the time I did not want the hassle of switching to another OBGYN mid pregnancy, so I stuck it out.

My doctor also informed me that I would have to be induced and rattled off a lot of information that didn’t make sense. My due date was originally May 31st and was changed to April 1st (one day). I tried to tell them that since he was measuring small and that this is my first, we ought to move the due date up more than one day. After stripping my membranes in the office, we planned on being induced April 4th at 5:00pm. I thought it was strange to schedule a baby in such a way if there were no complications, but again the doctor knew best in my mind. Now that I look back on it, he just wasn’t ready!

Finally, the day came and we arrived promptly at 5:00pm to have our baby. We waited patiently for an hour for things to get started. I had strep B so I was hooked up to an antibiotic IV and another IV so I would stay hydrated. I was not allowed any food or drink in the hospital. Before being hooked up to Pitocin, I was given ¼ of a dose of cerdavil. I told them I didn’t want Pitocin but “if things don’t speed up, we will give it to you in the morning.” Their plan was that I would have the baby the next day. Little did they know God had something different in mind. Contractions started about 8:00pm and around that time I asked for an epidural. I talked with my husband about it because at that time the contractions were bearable but I was afraid of how much pain I’d be in later. I was told by so many friends that I would really want the epidural. So they gave me the epidural and I fell asleep. Now it was nice to not feel anything, (But forgetting that I’m the girl who only needs one Tylenol to knock a headache and cut a Benadryl in half), I literally could not feel anything. I was pretty much paralyzed and at this point I’m stuck in the bed. I don’t know if they gave me too much or if part of it was how well I react the medication. It worked well and I was too drugged to even think of mentioning this to the nurse.

At midnight (4 hours later), the nurse comes in and says “I can see his head!” My husband was asleep and so both of us are groggily trying to get our act together. After that, all I can remember is that the doctor was getting frustrated with me for not pushing correctly and threatening to use the forceps. Of course, she had no idea that I couldn’t feel anything at all, and they ended up doing an episiotomy. To this day, I wonder if I had not had the epidural, would I have had an episiotomy and all the trouble that came along with that? In the end, (about 3:50am) our beautiful boy was born. He was small but boy did he have some lungs!

We figured as perfect as the pregnancy and delivery were, something had to go wrong. It couldn’t all be so perfect right? About two weeks after delivery, my OBGYN cussed in front of me because my episiotomy was not healing and needed to be completely redone. I was taking every precaution to make sure it did heal and even after that it was taking too long to heal. I was sent to an amazing physical therapist who had this miracle stuff called “antimicrobial silver” and I was all healed in about 2 or 3 weeks. I think he was 6 months old before that was all over. The second time around the antimicrobial silver went with me to the delivery room. 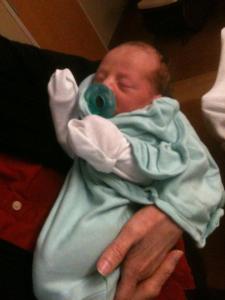