My husband and I found out that we were expecting just 3 months after we said “I do”. About 28 weeks into the pregnancy, I suddenly started swelling very badly. Up until this point I hadn’t taken very good care of myself. I had eaten however I wanted and my body was under a lot of stress from working long hours. I called my midwife group because I had started pitting one night, when you swell so bad that indentions are left when you press anywhere in the swollen area. They said not to worry about it. They determined since it was my first pregnancy, I probably just wasn’t used to the swelling. I gained approximately 15lbs in 2 weeks and I felt that something was wrong. I soon had an appointment a few days before 32 weeks and they seemed to be a little concerned because my blood pressure had risen to hypertension levels. They also didn’t like the amount of weight that I had gained since the previous appointment.

The midwife that I was seeing that day sent me home with two gallon jugs to collect urine for the next 48 hours in order to check my protein levels and I was instructed to check into the obstetrician emergency room at OU Children’s hospital. It was July 4th, my husband’s birthday. Needless to say, what followed shortly was not a part of our original plans for the day. We thought we would be getting the urine checked for protein levels and going home in a few hours.

When they tested everything and took my blood pressure again, they diagnosed me with Preeclampsia and immediately admitted me. I was no longer able to be under the care of the midwife team at OU but was instead moved to the high risk team and admitted to the hospital until the time that they thought would be best to deliver.

They put magnesium in my IV in order to keep my blood pressure down low enough that they could give me steroid shots to strengthen my baby’s lungs in case there was a chance that she would have to be delivered before 36 weeks. I was in the obstetric high risk area for 30 hours. It was so miserable. Magnesium through an IV does terrible things to your body. Its goal is to drop your blood pressure down but the side effects included swelling, bloating, and constipation. It can make your thinking very foggy, as well. I was weak and sick.

I was then moved to a regular floor for intermittent monitoring. I was put on blood pressure medication and they wanted to monitor Callie’s heart-rate every few hours. Within two days, I had gained almost 10lbs from the magnesium and was extremely constipated. At this point we were told the hospital was planning to keep us admitted until the delivery of Callie and that they would plan to induce at 34 weeks.

The night after I had been moved to a regular room, I was so constipated that I started feeling as if I couldn’t breathe. My blood pressure shot through the roof because they decided to put another IV into my arm and, as a result, they diagnosed me with severe preeclampsia because of the spiked blood pressure.

We started realizing that we were just there to live until the time they decided Callie would be delivered. My blood pressure reading was now only being taken every 4-6 hours and Callie’s heart-rate was only being measured twice a day. They told us that we should induce at 34 weeks because it would only become more dangerous for Callie to stay inside of me. When we asked if there was anything that we could do to try to hold on longer and allow Callie more time in the womb to continue to develop, they told us there was nothing and became frustrated with our questions. We had been placed under the care of the high risk team which for us consisted of multiple student doctors. We saw a different doctor every day, and if we asked a question no one could answer it, or it took a long time to receive an answer. They said they would have to talk with their head doctor but half the time we never got answers.

During this time, a friend of ours had been in contact with a friend that was a midwife in training. She started giving them tips on helping me to eat a higher protein diet, supplements that would naturally help bring my blood pressure down and suggestions to take detox baths to help with swelling and blood pressure.

After being admitted for a total of 5 days, I was 20lbs heavier, still extremely constipated and my blood pressure was still the same as it had been when I was originally admitted. We talked to the doctors and told them that we had decided that we would be able to do much more to help improve my situation from home, instead of just sitting and waiting for it to get worse. We left the hospital against the doctor’s wishes and had to sign papers that acknowledged we were doing this against their will.

We signed the release forms, came home and immediately changed everything about my diet. My protein intake was increased to 200g a day, I was drinking natural electrolytes, taking detox baths 2 times a day, taking many supplements and finally sleeping soundly.

We were able to decrease my blood pressure and my swelling diminished greatly. We went in to monitor Callie at the OB and my weight had dropped at least 5lbs in 2 days because of the swelling going down.

We were able to keep everything stable until 3 days after the 34 week mark. I noticed that Callie hadn’t moved much at all that evening and was praying that the Lord would keep her safe. I woke in the middle of the night and felt hiccups but the next day, I didn’t feel her much at all. We were concerned enough that evening that we drove the 30 minutes to the emergency area at OU Children’s Hospital to have Callie monitored. Her heart-rate was extremely low and they told us that we needed to do a c section immediately. Within an hour, we were in the operating room. This was the worst experience of my life.

When I was first admitted, they tried for 20 min to get an IV into me and after 6 tries they finally did. Of course my blood pressure was extremely high and dangerous at this point. They had Aaron go change into head to toe scrubs and meet us in the operating room. When they wheeled me into the OR, I had to sit on the edge of a cold metal table/bed while they injected the epidural into my spine. It was extremely painful and I couldn’t stop shaking. Aaron was finally allowed in at this time and I wouldn’t let go of his hand. While the operation was underway, I was still shaking hard and couldn’t control myself. I could feel their hands moving around in my stomach. It was such an odd feeling.

They delivered Callie and I didn’t get to see her immediately. Later, Aaron told me she was very blue and not breathing well when she was first delivered. Her breathing improved quickly and was wrapped her up tightly. She was brought over for me to see her face for a second and she looked straight into my eyes. I loved her so much and wanted to hold her close and assure her that everything would be fine. They quickly whisked her away to the NICU.

We had previously decided that if Callie had to be taken to the NICU that Aaron would go with her. I was never so scared and needing him than at that moment. I eventually passed out while they finished up the surgery and woke as they were wheeling me into my room on the high risk floor.

My close friends and family were there and I was informed that Callie was in the NICU and would likely be there for a while. She was only 3lbs 7oz and 18.5in long. She was such a long and skinny little girl. I was put on magnesium again for 48 hours to help bring my blood pressure down which was still very high. This meant that I wouldn’t be allowed to see my baby girl until the magnesium had worn off. I was so sad but was able to get plenty of pictures from my hubby.

They moved me to the regular floor in the evening after the 48 hours passed. I was so weak and sick. I decided to rest for the night before trying to go up a couple of floors to see my baby. The next morning I was still extremely weak and had a terrible headache every time I sat up, and it became even more intense if I stood. Even though I was in so much pain, I couldn’t stand not being able to see Callie.

Aaron wheeled me upstairs on the 3rd day after she was born to finally be able to see and hold my baby girl. I was able to hold her and talk to her but after an hour had to go back down to lay down. The headache was brutal.

I was finally released on the 5th day after surgery but Callie was still projected to stay in the NICU for another 3-4 weeks. There was no place for us to stay near her so we had to go back to Norman. I was still in terrible shape and even though I wanted more than anything to be able to sit and hold my baby, I could barely move because my head was hurting so bad and my body was very weak. We went every day to see Callie but I rarely lasted more than 1-2 hours before having to go home to rest.

After reading online, we think that I had a spinal headache which comes from the needle going slightly off course when the epidural is administered. I had every symptom. It was painful and took almost 10 days for the headache to finally subside.

We were finally able to take Callie home 3.5 weeks after she was delivered. Aaron was able to stay home with us for the following 2 weeks. We were so happy and relieved to finally all be home together just resting and enjoying each other after such a long journey. 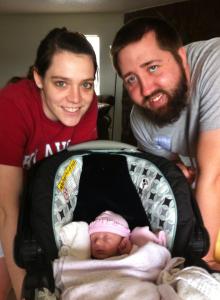